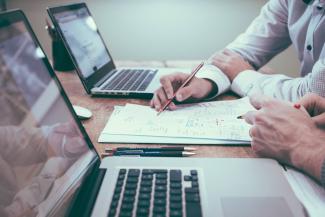 MOVES YOU CAN MAKE BEFORE JANUARY 1

On December 22th, President Trump signed the “Tax Cuts and Jobs Act of 2017.” This is the first major tax reform bill to be signed into law in decades and contains many changes to our current tax code that affect individuals and corporations.

Most of the new law takes effect on January 1st, 2018. However, I want you to be aware of several potential tax-saving moves you can make before the end of this year:

Currently, you can deduct state, local and property taxes from your federal income tax bill.  But starting next year, the ability to deduct these taxes will be capped at $10,000.

So if you still owe state and local income taxes on 2017 income (if you pay state income taxes quarterly, for example) pay the taxes before the end of the year to ensure you capture the deduction.

Pay Your 2018 Property Tax Before the End of the Year

While 2018 state and local income taxes cannot be prepaid, you are allowed to prepay your 2018 property tax before the end of this year and receive a deduction.  Some municipalities allow this, some don’t.  You should check with your city and/or county to see if they will accept prepayment of your 2018 property tax.  If they do, make the payment online or bring the check into the office in person to ensure the payment is credited in 2017.

Deductions are more valuable in 2017 than they will be in future years because marginal tax rates will be lower.  As such, it’s advisable to take as many deductions as possible before the end of the year.  For example, you may want to make your planned 2018 charitable contribution before the end of this year.  Not only does it help reduce your taxable income this year, but you may not be itemizing your charitable deductions next year as a result of the higher standard deduction that will be in place.

In addition, some deductions will be going away entirely as a result of the new law.  Miscellaneous deductions such as tax preparation and investment advisory fees will no longer be deductible.  So if your accountant will invoice you now for 2017 services, pay the fee before the end of the year.

If you can, delay income into January when tax rates will be lower.  This may apply if you are an independent contractor or small business owner and can wait to collect on invoices until 2018.

Of course, your personal situation is specific to you.  You should consult with your tax professional before making any of these moves.

If you would like to learn more about the new law, I would point you to this summary.

Please don’t hesitate to contact me with any questions.